As many of my walking tours include pubs I am often asked what is my favourite. I am always flummoxed by this question as don't have one particular favourite but a number and all for different reasons. I just can't pin my choice down to one.

Whilst thinking about this list I have discovered there are a number of pubs I have yet to visit and I will shortly post a separate blog about these. So one of my New Year's resolutions is to visit more pubs! There are also a number of pubs that I need to re-visit - I think I am getting a bit obsessed!

In no particular order:


The Star Tavern, Belgravia
There are 5 good pubs that I know of in Belgravia and all are ones I would go out of my way for; 4 out of 5 are pretty hidden too. My favourite is the Star as it is one of those pubs where you could easily while away a Sunday afternoon with a pint and the papers. In fact when researching my Belgravia pub walk I got caught in a downpour and took refuge in there (for a roast and a large glass of vino) and felt very comfortable doing so by myself. This pub is especially cosy in the winter months when the real fires are lit; it’s very hard to leave. Unless you know Belgravia it's very hard to find too but really worth the effort. Alternatively you could come on my tour (next public tours are on Sunday 29th January and Sunday 26th February). 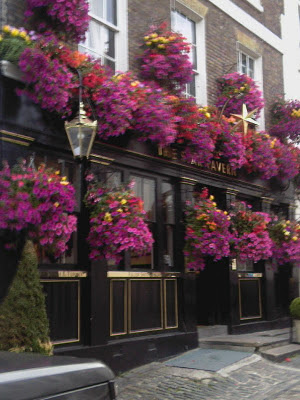 The Harrison, Kings Cross
I would never have discovered this fantastic pub if I didn’t have friends that worked in the locality. It’s opposite a block of flats called Mulletsfield which always makes me laugh but the pub is not what you would expect at all in the area. The food is really good and it has a similar warm comfortable feel as the Star does. Looking at the website I've now discovered they have rooms upstairs and a micro brewery in the basement.
The Seven Stars, WC2
This is a pub I would love to include on a tour as don't know another one like it but it is far too small to take a group inside. Unusually for one on the borders of the City (and tucked away) it is open at the weekends although I’ve only visited weekday lunchtimes the clientele then being mainly lawyers from the Royal Courts of Justice and surrounding Inns of Court. According to Pevsner the pub was built in the late 17th Century and the jewellers next door The Silver Mousetrap dates from the same period. One word of warning though the stairs to the loos must be some of the most precipitous in London and that’s after only a half a pint. 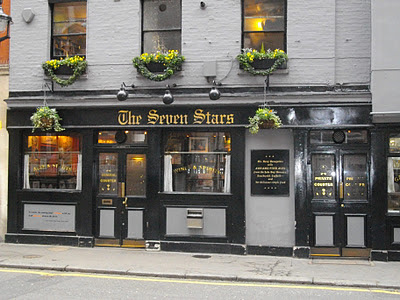 The Harrow, off Fleet Street, EC4
I have only discovered this one in the past year and it is now one of my favourites. It’s really tucked away and I have even introduced a couple of other pub aficionados to it! Run by Fullers its historic interior is well worth visiting. There are entrances in both Primrose Hill and Whitefriars Street but the tiny snug and upstairs bar are only accessible via Primrose Hill. Unfortunately it's not open at the weekends even on Lord Mayor's Show day. 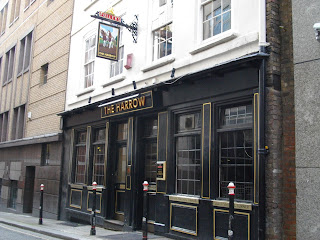 The Red Lion, SW1 (Crown Passage)
There are two Red Lions in the vicinity so don't go to the wrong one although the other one in Duke of York Street is well worth visiting too for its amazing mirrors and etched glass (another Fullers pub).
The Crown Passage pub just off Pall Mall feels like a local even though it is in prime tourist territory yards away from St James's Palace; in fact "it is said" that a tunnel once linked to the Palace from the pub. However you are more likely to see Monopoly pub crawl participants (being the nearest pub to Pall Mall) and masons from the lodge around the corner at 86 St James's Street which incidentally has a bar and carvery open to the public; the restaurant's website (which unfortunately isn't working at the moment) mentions nothing of its usual clientele. This pub always has a friendly atmosphere especially on a Saturday (it's not open on Sundays) and it is probably the pub where I have had the most conversations with strangers, normally started by commenting on the Monopoly crawl participants' amazing costumes. It's worth visiting the upstairs bar too which is where The Whisky Lounge hold occasional tastings the next one being this Thursday 26th January (the day after Burns' Night).
House wine is from Berry Brothers (Britain's oldest wine and spirit merchant) around the corner and they also stock the King's Ginger (a liqueur created for King Edward VII to keep him warm on long wintry drives) so there are more than enough reasons to visit this pub.
****************
There are so many fantastic pubs in London it will be hard to restrict my favourites to 10.
If you're looking to visit some of London's best pubs whilst learning about the history of the area email me and I would be happy to put together a bespoke tour.
I'm also obsessed with afternoon tea places too - but that's for another time.
The author of this blog (Joanna Moncrieff) is a qualified and insured City of Westminster Tour Guide who specialises in food and drink themed walks in the West End.
Details of all her walks are listed here and upcoming public walks are here.